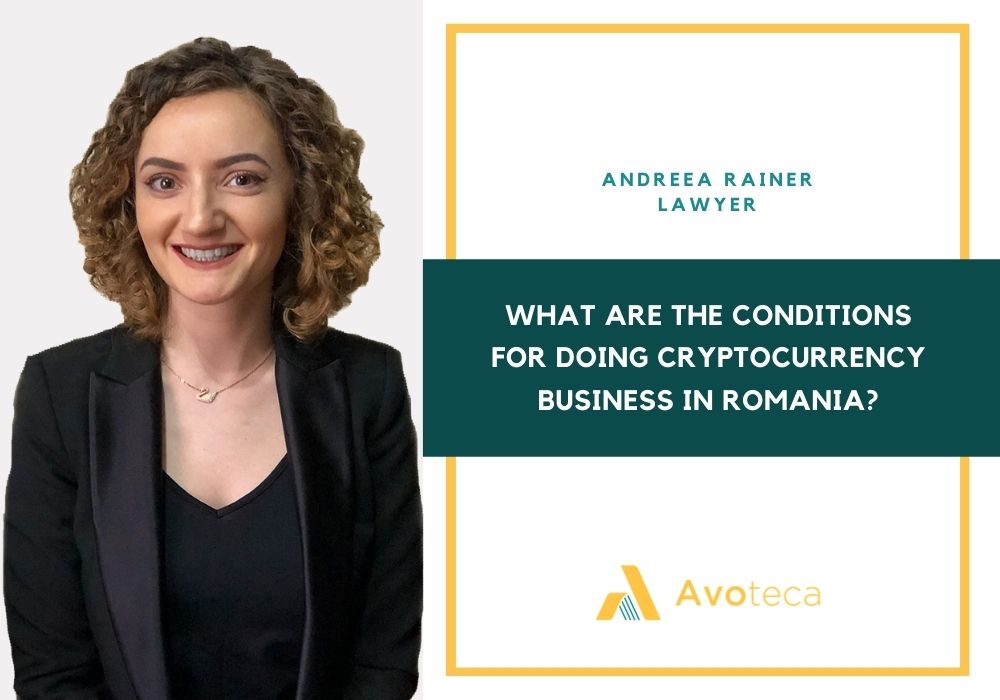 What are the conditions for doing cryptocurrency business in Romania?

Cryptocurrencies / virtual currency / digital money is an alternative to the money issued in a centralized system at the national level or, as they are also called, fiat / fiat money.

Whereas cryptocurrencies arose from the idea of ​​decentralization, the lack of regulation is obvious, at least in the initial stage. In Romania, as in other countries, virtual currencies do not yet have a specific regulation, the reason being the risk involved in cryptocurrency transactions. Most countries have drawn attention to virtual currency transactions, and Russia, for example, has proposed imprisonment for buying bitcoin with cash.

The European Central Bank (1), followed by the National Bank of Romania (2) discouraged the use of cryptocurrencies for several reasons, such as: lack of regulation and transparency, clarity and continuity, increased dependence on IT systems and networks, anonymity of players involved and increased volatility. However, due to the growing popularity and potential financial advantages, the prerequisites of regulation exist and steps are being taken in this regard in Romania as well. In addition, the revenues obtained from crypto transactions are taxable in Romania and in almost all countries.

Attention! Cryptocurrencies should not be confused with electronic currency.

Electronic currency is regulated by Law no. 210/2019 on the activity of issuing electronic currency, being defined as “the electronically stored monetary value, including in magnetic form, representing a receivable on the issuer, issued upon receipt of funds for the purpose of performing payment operations and which is accepted by a person other than the issuer of electronic currency” - in other words, it is the electronic version of banknotes and coins, which can be stored on an electronic payment device (e-money).

On the other hand, according to Law no. 129/2019 for preventing and combating money laundering and terrorist financing, virtual currencies are “a digital representation of the value that is not issued or guaranteed by a central bank or a public authority, is not necessarily linked to a legally established currency and it does not have the legal status of currency or money, but is accepted by individuals or legal entities as a medium of exchange and can be transferred, stored and traded electronically.”

How to get income from crypto?

From a business perspective, you can either position yourself as a freelancer and earn from mining or trading, or you can invest and set up a virtual currency exchange platform.

The basic method to make money from virtual currencies is to mine them, which means that the "miner" will verify the transactions and will add them to the distributed ledger/ blockchain (the concepts are not synonymous, but here there is another more technical discussion). Basically, authenticity is offered to the transaction, where the miner is assuring that the transaction is unique.

How exactly does it work? Miners, alone or organized in mining "pools", "untie" the equation and thus generate in an electronic wallet the code that can represent 1 bitcoin or 0.0005 bitcoin depending on the percentage of the equation solved by the miner.

How complicated is it? On the one hand, mining involves major investments in IT equipment (ordinary computers do not have the ability to mine), which requires a special operating environment in dedicated spaces. On the other hand, electricity consumption is very high.

Similarly to stock market trading or any other investment, trading involves taking a risk, so it is advisable to invest only the money you can afford to lose. There are currently several platforms on which cryptocurrency transactions can be concluded, and the choice should be made depending on the knowledge and experience in the field.

In trading, whether it is long-term or short-term, the risks must be assessed, as they directly or indirectly influence the gains. Among the most important risks today is the legislative risk, as a regulation that encourages the use of crypto will increase the price of virtual currencies, while discouragement by the authorities will lead to a decrease in value.

Considering the rationale for the authorities’ reluctance regarding virtual currencies, namely the risks mentioned above, it was expected to try to mitigate these risk.

The first steps in regulating crypto businesses were taken this year, with the entry into force of the Government Emergency Ordinance no. 111/2020 amending and supplementing the Law no. 129/2019 for preventing and combating money laundering and terrorist financing.

What are the obligations of virtual currency exchange platforms?

According to the legal provisions, the providers of exchange services between virtual currencies and fiat currencies and the providers of digital wallets must be authorized and/ or registered with the Ministry of Public Finance, through the Commission for the authorization of the foreign exchange activity. In addition to the authorization provided above, the Authority for the Digitalization of Romania will issue a technical endorsement for the virtual currency exchange platforms.

How is the income obtained from cryptocurrency transactions taxed?

The Tax Code provides the taxation of virtual currency transfer revenues as regards the earnings obtained from 2019 onwards. The applicable tax rate is 10% and is calculated on the gain from virtual currency transfer, determined as the positive difference between the sale price and the purchase price, including direct transaction costs. Earnings below the threshold of Lei 200/ transaction are not taxed provided that the total earnings in a fiscal year do not exceed the threshold of Lei 600.

The tax authority imposes the obligation to submit the tax form regarding the income tax and the social contributions due, for each fiscal year, until March 15, inclusive of the year following the one of the income gain. The revenues obtained from cryptocurrencies are framed within the category “other incomes” from a tax perspective.

In the tax field, there are cases in which the courts of law have ruled on the tax payment regarding crypto gains. For example, the court held that

"from a fiscal point of view there must be a difference between the situation in which the virtual currency was purchased, in which case the tax must be calculated on the net income represented by the difference between the sale price and the purchase price, and the situation in which the virtual currency was obtained through "mining", when the net income obtained from this activity should be determined (more difficult) by deducting from the selling price the expenses incurred in order to obtain the virtual currency". (Decision no. 1370/2019, Constanta Tribunal)

On the other hand, the Court of Justice of the European Union has held that the exchange operations of "bitcoin" virtual currency with traditional currencies are exempt from VAT (Case C-264/14, Hedqvist). Of course, taxation on the profits of virtual currency exchange platforms involves another discussion on the micro-enterprise income tax or the profit tax.

To conclude, cryptocurrency businesses in Romania are legally feasible, both from the perspective of a freelancer who mines or trades, as well as for dedicated platforms. However, the legislative framework in Romania is not yet very well defined, and authorities such as the Authority for the Digitalization of Romania are expected to intervene with clarifications.